Sinterklaas is not the same as Santa Claus!

They certainly look alike, but nee, this red-suited man, who celebrates the life of Saint Nicholas, is a historical Dutch character named Sinterklaas.

While most countries in Europe, and around the world for that matter, are readying for the big Christmas holiday here in the Netherlands, we are right in the middle of possibly the biggest celebration of the year, called Sinterklaas. The celebration ends on December 5th, the eve of Saint Nicholas’ feast day. He was the Patron Saint of children.

Although The Vatican  removed Saint Nicholas from the Roster of Saints years ago because there was that not enough information known about his life, and details about the 3 miracles required for canonization were a bit sketchy, he was also the Patron Saint of sailors.

The Dutch point out the dissimilarities between Sinterklaas and Santa Claus: the bishop’s mitre hat which Sinterklaas wears (vs. the long red hat with a pom pom Santa Claus wears), or the fact that Sint  rides a horse, while Santa  travels by reindeer. If you aren’t convinced yet that the character is totally different, then you will definitely be  when you find out that Sinterklaas doesn’t have elves!

Instead, Sint has helpers called Zwarte Pieten, black and fairly harmless  (unless you’re a bad kid, in which case they’ll take you to Spain for reeducation in the bag in which the presents were……until they’ve learned a lesson). These helpers have also been known to dance a lot and cause minor disturbances whenever they’re around. But don’t confuse them with elves. If I was a kid and threatened with having to deal with Zwarte Piet if I was bad, I would probably change my behavoir, – at least for the time they are in he country….

During the Sinterklaas celebration, which lasts for a couple of weeks before culminating on December 5th, the eve of the Sint Nikolaas’ feast day  Dutch children leave their shoes by the fireplace with a bowl of water and a carrot for Sint’s horse (Amerigo). He in turn, leaves the kids holiday treats like pepernoten (little  spice cookies) or a large chocolate candy shaped in the first letter of the child’s name.

Sinterklaas arrives in the Netherlands by steamboat from Spain. The connection there, aside from the fact that Saint Nicholas is the patron saint of sailors, is that the remains of the original 4th century A.D. Greek bishop  Nikolas, who later was cannonized Sint Nikolas, were moved from Greece to Bari, Italy in the 11th century. Spain then conquered Italy, and adopted the historical figure as their own, thus making him a Spanish Saint.

As for the connection between the Saint Nicholas and children, the story goes that the miracles performed by Bishop Nikolas were to keep children safe from horrific fates.

In the end, not only are the origins of Sinterklaas and Santa Claus the same, but those of the the British character Father Christmas as well. Since the latter two are celebrated on the same day (25th December), the differences in characters tend to be overlooked. But with the Sinterklaas celebration taking place almost three weeks prior, it is  observed totally separate from Christmas. It is especially interesting in regards to retail stores here, which are done up in Sinterklaas displays for about 3 weeks leading up to December 5th. Then, practically overnight all the stores transition to Christmas decorations and selling Christmas trees. All the advertising converts as well. 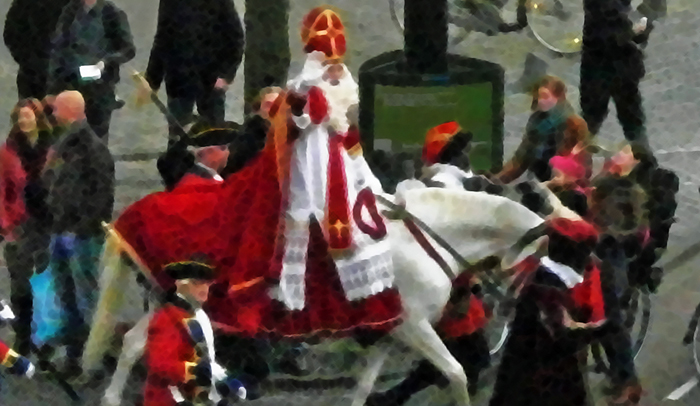 It’s all VERY interesting, since it is like having a big Christmas and then a bigger Christmas, each with a remarkably similar character at its core. But don’t confuse Sinterklaas for Santa Claus!

(adapted from an article in the Anglo info Expat journal)